The Hadley Parabolic Bridge is the best example for Parabolic bridge,which is located acrosss the Sacandaga River in Hadley,New York, United States. It is also known as iron bridge constructed in  19th century.It is the only surviving iron steel based semi-deck lenticular bridge in the state.The length of the span is extended based on the length of the meter.Tensile steel is always used to construct the iron related parabolic bridges.Parabolic bridge is a type of bridge in which the deck is hung below suspension cables to bear a load on vertical suspenders. 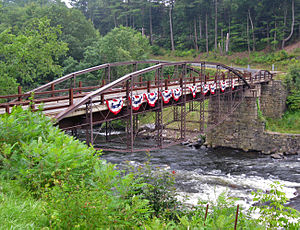 About Young Modulus:
Young's modulus is also known as the tensile modulus.It is a measure of stiffness of an elastic material used to construct a bridge and is a quantity used to characterize materials to be used. Young Modulus is defined as the ratio of  uniaxial stress over the uniaxial strain in the range of stress in the used material.The tangent point is obtained from the slope of the stress/strain graph.In solid mechanics, the slope of the stress/strain curve at any point is called the tangent modulus which is the positive coefficient.The tangent modulus of the initial position, linear portion of a stress/strain curve is called Young's modulus. It can be experimentally determined & Calculated from the slope of a stress-strain curve created during tensile tests conducting on a sample of the material.
This experimentation is also called as elastic modulus or modulus of elasticity.Young's modulus is the most common elastic modulus used to measure the elasticity of the material.

Some other modulus related to Young Modulus are:-
About the Project:

The concept of the project is to make a parabolic bridge with high young modulus.High Young modulus states the high elastic property that is applied to the material construction.Hence the bridge is designed to high young modulus to attain a following advantages,

Some advantage of this project:
Conclusion: