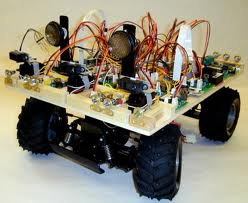 Abstract:
This project is nominated as a national project 2012 and awarded as best project in Southern region.This project is based on the automatic control of Braking system in automobiles to prevent from the minor/major accidents occurs often in suburbans.Hence this projects is designed with a motto of prohibit the vehicle collision which occurs in suburban traffic.

Components used for this project:

About Microcontroller:
A microcontroller  is a small computer on a single integrated circuit containing a processor core, ram memory, and programmable input/output peripherals with I/O configuration  as well as a typically small amount of RAM. Microcontrollers are designed on the basis for embedded applications mostly used in automobiles, in contrast to the microprocessors used in personal computers/Laptops or  other general purpose applications. Hence Controller beats the processors in chip field

About Sensor:
A sensor is also called as detector which converts that measured  physical quantity into a signal which can be read by an instrument or by an observer. For example, a mercury enclosed -in-glass thermometer converts the measured temperature parameter  into expansion and contraction of a liquid based on the temperature which can be read on a calibrated glass tube and hence the result is obtained from manual thermometer.But in thermocouple converts temperature of the desired location to an output voltage which can be read and displayed by a voltmeter.
Sensors are used in everyday in various application objects such as touch-sensitive elevator buttons,Escalator  and lamps which dim or brighten by touching the object base. There are also lot of  applications for sensors of which most people are never known about this application. Applications include cars,heavy trucks,home appliances,object finder,industrial areas,machines, aerospace, medicine, manufacturing units and robotics.
About ABS(Autobraking System):
Automatic braking is a latest technology for automobiles/tranporter to sense an imminent minute collision with another vehicle,animal, person or obstacle or a danger region such as a high speed approach to a stop sign(eg;School areas) and to respond with the anti-braking system by either preliminary charging the brakes or by applying the brakes on various location. Sensors to detect other vehicles or obstacles can include radar, infrared, ultrasonic,ultraviolet or other technologies.

Actual Process:
Various sensors are embedded in various place of the vehicles.If any sensor detect the obstacles on their way,it sense the object and sends the signal to Micro controller. Microcontroller measures the distance of the obstacles and based on the distance it will control the vehicles.Hence this system is very useful in preventing the vehicles from collision.Once the signal is obtained from the controller the relay circuit is active and it will control the solenoid valve.The solenoid valve is merged with Brake pedal.Hence the action in solenoid valve is proportional to the movement of brake pedal.

Conclusion:
By using this project we can provide a clear solution to the car manufacturer.Once we applied this project in automobile industry we will reduce the amount of accident occur in the suburbans as well as in remote areas.
Tweet